Today we are talking to you about a crowdfunding campaign underway on Ulule with the theme of cooking and yôkai. On the Yatai menu indeed offers to make recipes for Japanese dishes, in the company of these folk spirits of Japan. To learn more about this project, we interviewed the two designers: Aki and Justine.

Hi Aki and Justine, and thanks for this interview. First of all, tell us about yourself: what are your respective backgrounds and your relationship to Japanese culture?

aki: Hi, I became interested in Japan in 2001, thanks to the anime fruit basket† What really immersed me in Japanese culture and its gastronomy was the way Amelie Nothombi described in his books Stupor and tremors and Neither Eve nor Adam† As for the kitchen, I like to share this passion with my children and pass on my recipes on my website, for the pleasure of both the youngest and the oldest. I like to bake and build a bridge between France and Japan in my creations.

Justine: I am a graphic designer, illustrator and marketing consultant. I illustrate in the fields of publishing, visual communication and interior decoration (framed illustrations) in a universe inspired by Japan. I was immersed in Japanese culture very early on thanks to parents who were open to animated films. To illustrate: it has always been a calling. i wanted to be rough man (alcohol marker mastery), this job was no longer available in the school I wanted so I took a CAP designer in graphic communications at La Joliverie to become a graphic designer. I continued my studies at the Ecole Supérieure Brassart (Campus Nantes) by obtaining my diploma multimedia graphic designer. In 2019 I decided to open my company in Saint-Nazaire and develop my universe around Japan.

What brought you to this project?

aki: We met when Justine shared a drawing on a Facebook group on the web. It was a mutual crush. In the beginning we worked together on the concept of a tea room on the youkai. Justine developed the graphic universe and logo. It was after a difficult period and after receiving her book “Les Popotes de Saison” that I suggested Justine work together. We’ve decided to break the customer order barrier to create a project together where each values ​​the other’s work. We have been working together for more than 2 years.

Where does this passion for youkai come from?

aki: For the youkai I discovered and appreciated them thanks to the work of Shigeru Mizuki whose anime Gegege no Kitarō and his many books on the subject: The youkai dictionary† in the youkai† I have always been fond of mythology and ancient legends. It is quite natural that Japanese folklore has won me over.

This cookbook is a bit conceptual: in addition to the recipes, the gastronomic reader collects life points by making the dishes. How is the book’s journey designed?

aki: Together with Justine, we decided to create a book that engages the reader in its story. On the yatai menu is a journey where readers must face the youkai to gain experience in the kitchen. It’s a fun way to encourage the person to make the recipes in the book and take on a challenge. At the end of our book, he is rewarded with a bestiary of stories and anecdotes for discovering the youkai.

Some levels are dedicated to the In pursuit of the stars association, such as the Yosei package (€2 collected for the book, €10 for the association), and part of the funding will go to this association as a donation. Tell us about this association.

aki: Located in 31 (Ponlat-Taillebourg), this association aims to bring a little sweetness and happiness to sick and hospitalized children. In connection with the CHU of Purpan, the CH of Tarbes and the IGR of Villejuif, it regularly brings soft toys, board games, books, school materials and creative hobbies.
The association helps families from time to time to purchase equipment specific to a disability, a change in health, or to realize the dreams of little warriors. She also sends packages of toys all over France to children battling various serious childhood illnesses. By means of demonstrations, the association collects money for research against childhood cancer. 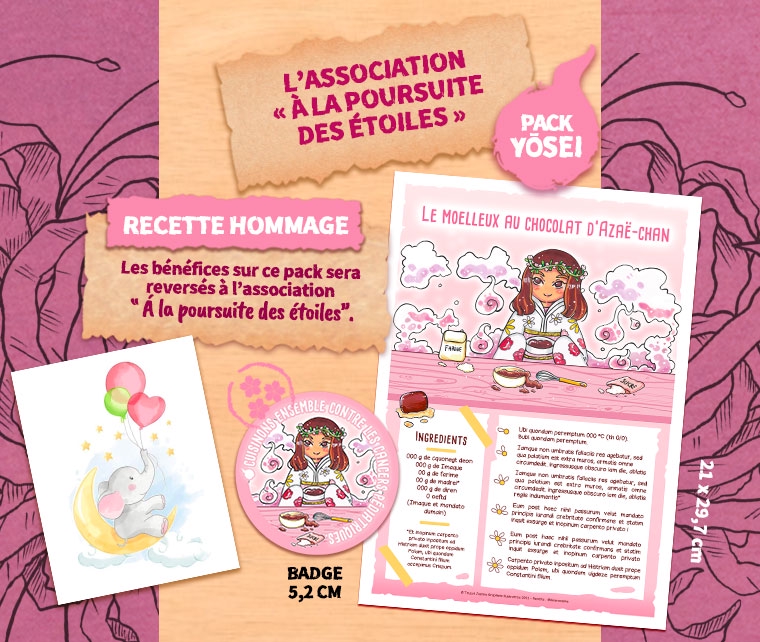 Justine, with the book Meals of the Seasonsyou made illustrations of dishes and with On the Yatai menu you switch to full-page illustrations of characters with backgrounds. Was it a challenge to provide so many drawings when switching registers for this project?

Justine: It was less complicated for me to make youkai, even if it was outside my comfort zone, than to make the dishes in the book Meals of the season he asked to imagine the chef’s dishes. In the book On the Yatai menu they are my own graphic creations be it the color choice of the youkai or the design of the creatures. Valérie wanted me to fully develop and have freedom in my creations, because she loves my work. Which surprised her by the final designs of a number of youkai.

Do you also do the graphic charter for the book?

Justine: As the designer of the book, I take care of the total composition of the book. The layout, the graphic elements, the consistency in the graphic charter, the choice of photos and the retouching. Because of my work, Valérie trusts me to showcase our work and that the book as a whole is coherent. It is my real pleasure to do the model and color choice/composition.

Did you already have a passion for Japanese folklore before this project? Do you perhaps have a work related to the Japanese imagination that is close to your heart as an artist?

Justine: Japanese folklore already interested me because of Japanese culture (kitsune). I started looking into it even more when I went on a one month solo trip to Japan in 2020. Seeing the Inari shrines and the stories given to tourists made me want to learn more. I really liked the movies Miyazaki if Princess Mononoke† chased away† My neighbor Totoro† pumpkin pie† I find this universe inspiring.

How did the choice of dishes in the book go?

aki: In France we are used to know sushi, maki, yakitori and okonomiyaki. I wanted to introduce dishes that we were less used to knowing. I’ve done a lot of research to think outside the box and come up with easily accessible recipes for everyone. Whether the person is a beginner or a confirmed person.

Can we expect fusion dishes, or more traditional dishes?

aki: On the Yatai menu is inspired by Japanese street food with a French twist. We find certain dishes that can come from an izakaya, such as those from a yatai or even a street restaurant. For the Nikuman, for example, you will find a mixture with the rougail sausages, typical of the island of Réunion. In more traditional dishes, there is our kappa ramen, which is composed of an onsen tamago and pickled cucumbers. 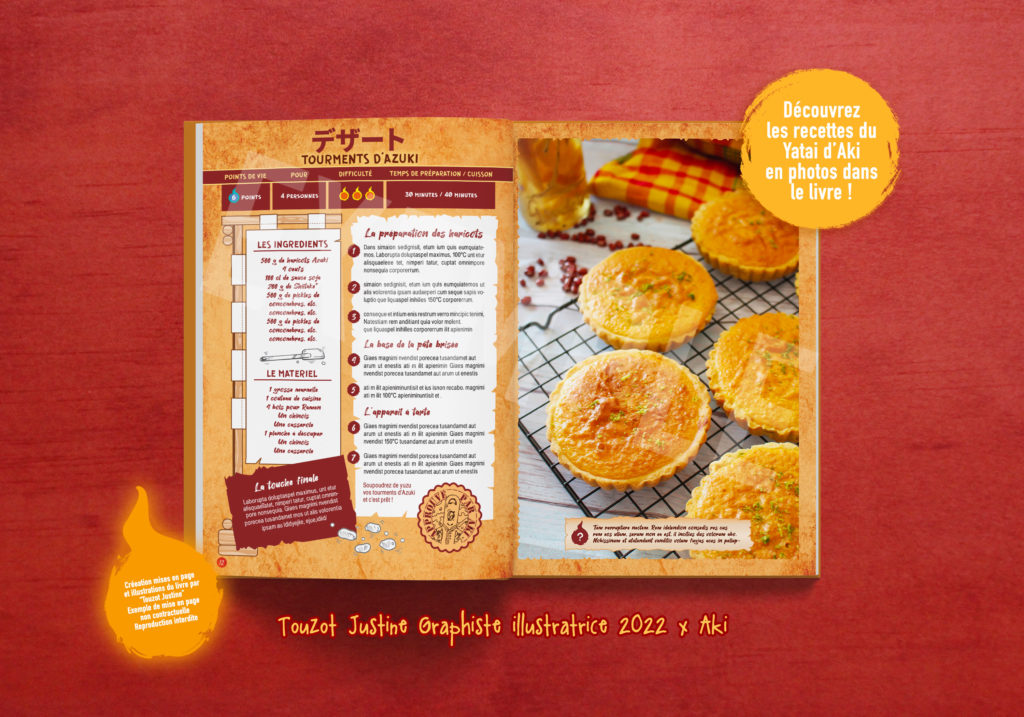 One of the recipes from the book © Touzot Justine 2022

What can we read in the section dedicated to the Yôkai bestiary?

aki: In the bestiary you will discover legends revisited, there is sometimes romance such as the legend of Kitsune and Oiran or life lessons taught by youkai. For the anecdotal part, you will discover the hidden face of the yôkai, it is a fun content that makes them almost human and endearing. We can think of the bestiary as a stopover at the counter of our Yatai, where we let ourselves be told stories while eating…

Lots of very varied goodies come to enamel the levels and counterparts. Between the sponsors of the lottery tickets, the craftsmen who design certain goodies or the guest illustrators, we feel that there is a coherent group around the project. Do you already know these artists?

aki: We looked for artists around us to consolidate the project. Each person had a direct link to our counterparts so it was consistent with what Justine had been working on on our Ulule. We already knew Lady Litchi and Hell’O Kawaii (who had also worked for the .) Meals of the season) as well as the Graphicom and Goubault printers. We were lucky enough to attract artists who wanted to follow us in our project.

As you will have understood, if you are interested in the project of this book and you want to read it, there is only one solution left: participate in its creation and make it a reality. The fundraiser ends on May 7, 2022, so don’t delay!