“We are at war…”. This phrase uttered by Emmanuel Macron during his speech on the health crisis in March 2020 is still in everyone’s memory. The use of this formula was criticized at the time as it was considered by some to be disproportionate. Indeed, armed conflict often results in a much higher number of casualties than that of the current pandemic, but also in immense material damage that requires a major reconstruction effort.

However, some specialists do not hesitate to make comparisons between the current macroeconomic situation and that of the 1940s.

Below we highlight the similarities and differences between these two periods and attempt to draw lessons from them for our macroeconomic forecasts and asset allocation decisions.

Similarities Between the 1940s and the Pandemic.

During both periods, the financial markets were confronted with uncertainty and spikes in volatility. Source of these disturbances: the Second World War (and the post-war period) 80 years ago and the Covid-19 pandemic today. While these two crises are structurally different, they have the following similarities:

The 1940s are the only period in modern history when government agencies increased budget spending in the same way they did during the current health crisis — that is, massively and on purpose. Neither the 1920s nor the 1970s can be compared with this exceptional situation. By the 1920s, the budget was in balance, debt was under control, and the Fed had raised interest rates. Keynesian policies were not adopted by government authorities until the 1930s. During the crisis of the 1970s, the budget deficit remained below 1% of GDP until 1974. longer period.

During the two periods mentioned above, the US Federal Reserve has pursued a resolutely expansionary monetary policy by cutting interest rates and resorting to quantitative easing to stimulate the economic recovery and support financial markets. During World War II, the Fed did not hesitate to resort to unorthodox methods, such as yield curve control by buying Treasury bills and set two yield targets from April 1942: 3/8% for T- bills (3 months) and a maximum of 2.5% for 10 years. A policy aimed at easing the interest burden of a US state facing the explosion of debt and budget deficits. It was not until 1951 that the Federal Reserve was able to return to a ‘normal’ monetary policy.

During the 2020 pandemic, in addition to mounting budget deficits, the Fed and other central banks have also resorted to an asset purchase program, which involves acquiring government bonds and asset-backed securities into mortgages. So it is a real resemblance to that of the 1940s: the coordination of fiscal and monetary policy.

Another similarity between the two periods is the sharply increased demand for durable goods and the shortages noted at the end of the crisis. As today, restrictions during World War II caused households to build up significant savings surpluses. The US household savings rate had reached 27% of annual income, a level four times higher than before the war. After the armistice, households plunged into their savings, leading to a very sharp rise in demand. On the supply side, many assembly lines were severely disrupted because the US government had asked factories to prioritize the production of weapons of war (bombs, tanks, etc.). This had led to shortages of durable goods, a situation exacerbated by the strong recovery in demand after the war ended. This double shock – rising demand and supply bottlenecks – led to a series of inflation peaks in the 1940s.

As in the 1940s, 2021 will be marked by a rise in inflation well above expectations.

An identical scenario appears to be occurring in 2020-2021. The demand recovery appears to be much stronger than expected as the world faces shortages of goods and services, labor shortages, transport delays and imbalances between supply and demand in the energy sector. As in the 1940s, 2021 will be marked by a rise in inflation well above expectations. Indeed, inflation reached 6.8% (on 12 rolling months) in November, ie the largest price increase in 32 years.

The Negative Real Interest Rates of the 1940s

As discussed above, the fiscal stimulus had a very positive effect on growth, while the double shock of increased demand and supply constraints led to a sharp rise in inflation. Under normal circumstances, such an inflationary rise would have put significant pressure on bond yields. However, bowing to pressure from the US Treasury, the Federal Reserve capped long-term Treasury yields to 2.5% until the spring of 1951.

Indeed, these negative real interest rates have also encouraged the purchase of risky assets, such as lower-quality stocks and bonds. Investors had no choice but to earn positive real returns.

As can be seen from the table below, despite a macroeconomic context that is difficult to decipher (high inflation, high budget deficits, high debt-to-GDP ratio), stock market performance is relatively good (8 positive years out of 11), even if the lasted until 1954 for the Dow Jones to reach its all-time high of 1929.

The return of the forties?

As discussed earlier, the current macroeconomic scenario seems to share certain similarities with that of the 1940s (strong growth, high inflation, record debt, abnormally low interest rates, etc.). However, there are some notable differences. First, we believe that global economic growth should normalize in the coming years. The same goes for inflation. First of all, because the demand with a double shock – the supply should start to decline next year. On the other hand, today there are secular deflationary trends that we call the 3Ds – demographics, digitization and debt. Only the last factor (the D of debt) was used in the 1940s.

Thus, inflation could come close to its cycle high, but still remain above the Fed’s target for a longer period of time than initially expected.

On the other hand, it is unlikely that the massive debt and large budget deficits in the United States can be absorbed in the coming years. As a result, interest rates and nominal bond yields could remain low for several years to allow the US Treasury to meet its maturities.

Inflation above the central bank’s target and an expansionary monetary policy should generate de facto negative real interest rates, an element more favorable to risky assets. Be careful, however: this exceptional situation could cause some volatility in macroeconomic data, resulting in an increase in financial market volatility.

What are the main lessons to be learned from the 1940s?

Real Yields on 10-Year US Bonds 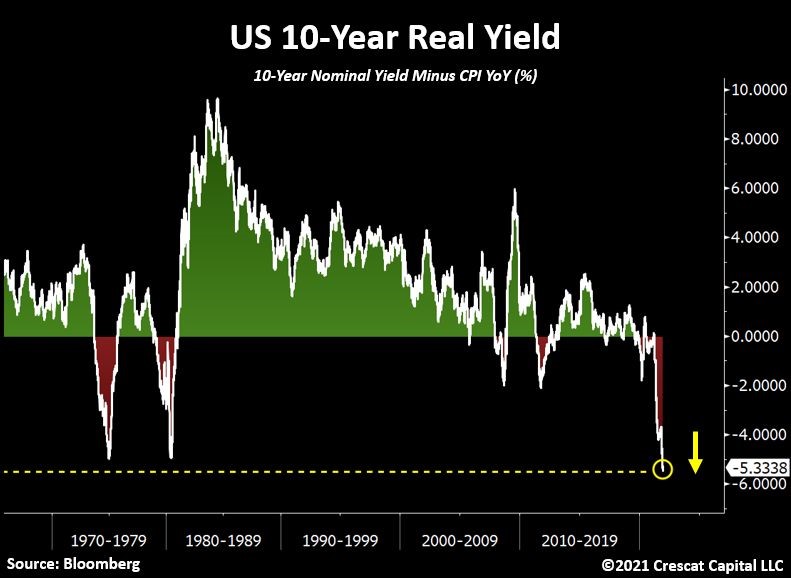