Connected devices are doing well and we are using more and more of them. From wearables to connected food processors to all internet-connected gadgets, they are everywhere. In this context, the trend of Cloud Computing – the process by which a large number of smart devices connect to the Internet to function – has grown and is expected to continue to grow in the coming years.

End-user spend on public cloud services worldwide
from 2017 to 2023 (in billion US dollars)
Source: Statista

Simple and fast, Cloud Computing enables companies to store and process data outside of their own physical hardware. This allows them to be stored on a network of remote servers called the “cloud”. A simple example is Apple’s “iCloud” service. Apple-branded cloud service allows you to store data from your iPhone in the cloud and then retrieve it on another device connected to the Internet, such as your computer or tablet. This data is therefore no longer limited to the data storage capacity of the respective smartphone.

So it is clear that the “cloud”, this famous cloud, conjures up a huge decentralized network on which our personal data resides. But let’s not be fooled. It must be said that the marketing of cloud operators has worked well to encourage users to store their entire private and professional lives on these servers, which are in fact not in the cloud. Last year, there were nearly 1,500 large data centers in the United States. These massive warehouse-sized facilities house thousands of servers that process and store the personal data that users rely on every day for their collaborative document-editing tools.

Facilities that partly belong to the giants of data marketing that we know well, such as Amazon, Microsoft and Google, among others. Cloud Computing is ultimately just the reflection of this intense battle that these operators are waging to lock most of the data of companies and individuals on their platform.

To partially stop relying on these centralized platforms, Edge Computing may be an answer. In the perspective of a data-rich future with billions of internet-connected devices around us, data processing will have to maintain or even improve its speed, but above all become more reliable.

Cloud Computing, given its centralized nature, has proven to be particularly profitable in recent years, but the rise of the Internet of Things (IoT) has put a strain on network bandwidth by dramatically increasing the amount of data that can be transferred over a network. But ultimately, thanks to advances in technology and innovation, not all connected devices need to be completely dependent on the cloud. Some gadgets can avoid this traveling of data with the cloud, which is a fundamental concept of Edge Computing.

Today, the IoT’s ability to process data with hardware, often chips, is growing and becoming more powerful. For example, there are cameras that analyze live images, in real time, locally without the intervention of cloud algorithms. We can see several benefits in this, such as improved data processing performance and increased GDPR compliance by using the cloud to transfer images to data centers.

Ultimately, this approach argues in favor of the idea of ​​storing and calculating environmental data that is available at the place where the action takes place, i.e. locally in the field, without depending on cloud services. Finally, Edge Computing makes it possible to process data closer to where it was created (i.e. motors, pumps, generators or other sensors), reducing the need to transfer all data to the cloud.

The Edge Computing infrastructure is defined as follows:

In other words, instead of storing and processing large amounts of data in large centralized centers that may be thousands of miles away from the device on the network, Edge Computing relies on a distributed network of sensors embedded in objects that are close by. connected. This enables organizations to quickly respond to data where it is captured, but also shortens the distance between where the data is captured and where it is processed, which not only lowers the cost of data transfer, but also reduces latency, bandwidth usage and infrastructure costs improves . We can also mention that Edge Computing makes it possible to partially limit the exposure of companies to cyber attacks on Cloud infrastructures.

“When we transfer the power of the cloud to the device – the edge – we provide the ability to react, reason and act in real-time in areas of limited or no connectivity… it’s early days. , but we’re starting to see how these new capabilities can be applied to solve critical global challenges.” – Kevin Scott, Microsoft CTO

Finally, the Cloud is still a fundamental pillar in Edge Computing. However, it occupies a less important place than what it currently represents. In short, the ambition of the Edge is to provide an innovative environment that enables users, especially companies and public entities, to progress in the digital transition and to improve the applications, their resilience and their independence from of the giants across the Atlantic. † Edge computing also enables a degree of interoperability between emerging connected devices. It converts communication protocols used by older systems into a language that modern connected devices can understand. This means existing industrial equipment can be seamlessly and efficiently connected to modern IoT platforms. 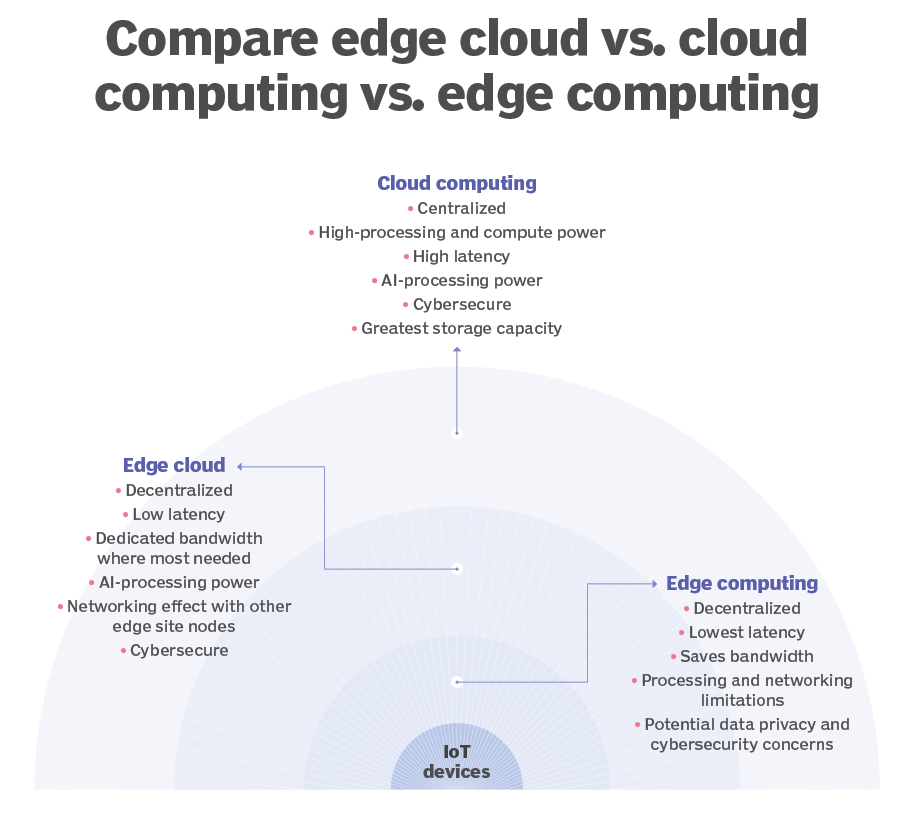 For example, a small enclosure with several servers and some storage space could be installed on top of a wind turbine to collect and process data produced by sensors in the wind turbine itself. Another example, a railroad station may place a modest amount of computing power and storage in the station to collect and process a large amount of data from rail and rail traffic sensors. The results of such processing can then be sent back to another data center for human review, archiving and merged with other data results for broader analysis. 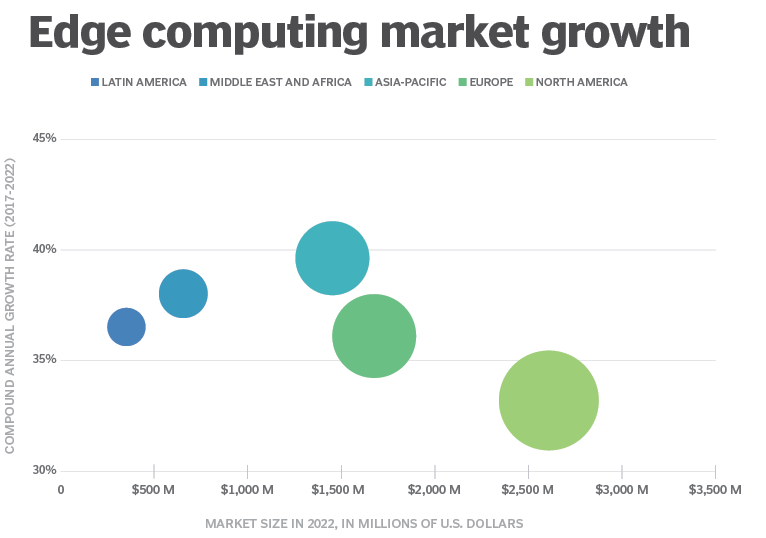 According to the consensus of CB Insight the market for advanced infrastructure such as Edge Computing should weigh $450 billion in the coming years. A number of companies are positioning themselves in this market to take advantage of the evolution of the IT market and keep up with the edge computing wave.

Here we understood that Edge Computing makes it possible to unclog the Cloud networks of tech giants. Challenges are likely to arise around device capabilities, including the ability to develop software and hardware that can handle the offload of cloud computing. It is also challenging to teach machines to switch between computers that can be done on the edge and one that requires the cloud. In a future article, we will examine on a case-by-case basis what the companies presented in the image above offer concretely in the context of Edge Computing.