At least 1,275 new sanctions, most notably the exclusion of Russia from the international financial system. This is the response of many countries around the world to Vladimir Putin’s recognition of the Ukrainian separatist republics and then to the armed invasion.

The current crisis proves to be a striking example of the use of what is called ‘geoeconomics’. In the context of foreign policy, it can be defined as the use of economic instruments to influence the political objectives of another country.

As early as 1989, in a prophetic article, US military strategy specialist Edward Luttwak prophesied its generalization. In his view, in the dual context of globalization and the end of the Cold War, the balance of power would be based more on the economy than on military means.

The advent of “globalization” was announced in 1983 by Theodore Levitt, an economist at Harvard Business School, where he was editor of the magazine for four years. He pointed to the fact that markets worldwide were entering into a growing dynamic of interconnection. The phenomenon has not weakened since then: according to the KOF index compiled by a Swiss economic institute, the intensity of the globalization of commercial and financial exchanges has doubled over the past 50 years.

At the same time and in the context of the end of the Cold War, we have witnessed a spectacular evolution of the forms of warfare. While conflicts between different states have become rarer, tensions and conflicts within one state have more than doubled. 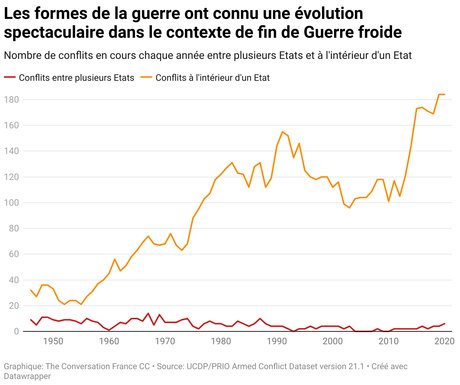 So in 2020 there were only three interstate conflicts in the world against some fifty civil wars. Among them Syria, Ethiopia, Burma and Mali. In all these countries, the state struggles with components of civil society that oppose and/or oppose each other. This is one of the hallmarks of our time: war, long an expression of the supremacy of states, today is usually the sign of its collapse.

This decrease in the number of interstate conflicts does not mean that states, especially the richest and most powerful, have given up defending or imposing their interests. They just tend to resort to other means of power, more frugal than military ones.

This shift from military geopolitics to geoeconomics stems largely from the interdependence caused by economic globalization. Admittedly, traditional geopolitics has not disappeared, but its exercise is based on the weapons of our time: less steel and more capital, less shells and more sanctions. As Joseph Nye, a great American power theorist often regarded as the liberal counterpart to the more conservative Samuel Huntington, argues that with globalization, political actors tend to replace the threat of military sanctions with economic sanctions.

The reason for this is twofold: the geoeconomic balance of power focuses on the fundamentals of globalization, ie creating value, without destroying permanent capital, infrastructure, cities or killing people directly, like conventional warfare.

Under sanctions, the positive-sum game of liberal globalization becomes a zero-sum game: not everyone wins when geoeconomics comes into play!

A new era of sanctions

The quantitative and structural examination of the nature of the sanctions imposed by states on others reveals how far the grammar of conflictuality has evolved. Not only has the number of sanctions more than doubled since 1990, but above all their nature has changed.

Traditional sanctions, such as arms or trade embargoes, remain. However, those that have experienced the greatest growth are directly related to the rise of financial globalization and the mobility of people. Financial integration, better payment tracking, the extraterritoriality of US law related to the extensive use of the US dollar and the desire to use targeted sanctions have contributed to this diversification of geoeconomics tools. 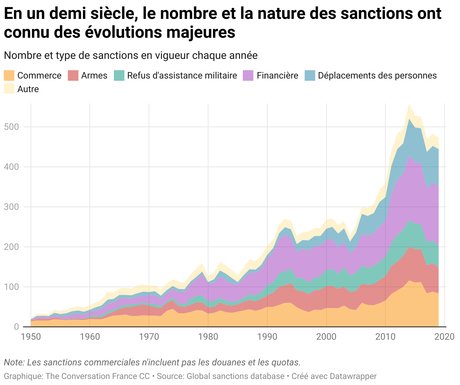 The new era of sanctions also affects their objectives. Today, the majority is the initiative of the United States and the European Union, that is, countries with strong economic bargaining power. They often strive to enforce their founding principles abroad, such as human rights and the rule of law. This is evident from the aggregated data in the Global Sanctions database. 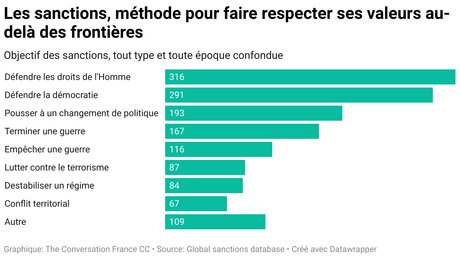 However, sanctions do not always achieve their goal. On average, we can say that they have complete success in just over a third of the cases. For Ukraine, we may therefore fear that geoeconomics will give way to classical geopolitics, especially if Russia succeeds in strengthening its trade with economic partners that have remained neutral, such as China. Kiev’s allies are already moving toward long-term military support, shipping heavy weapons. 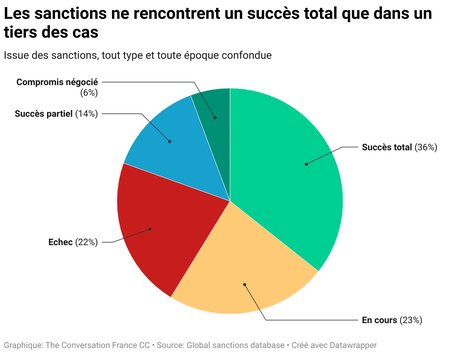 Finally, it seems important to remember that economic sanctions may not deliver the expected goals and have dire consequences for the populations subjected to them. The historian Nicholas Mulder’s works on World War I and the colonial empires, for example, are there to remind us of this.

The original version of this article was published on The Conversation.